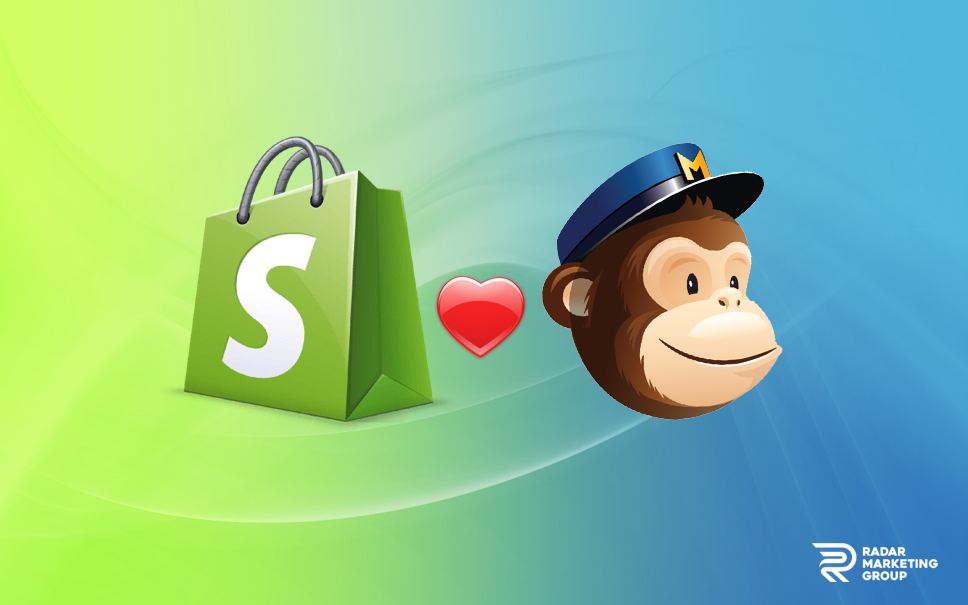 5 Ways to Integrate and Connect Shopify to Your Mailchimp List

Luckily, there are several different options available for exactly this integration. Which one you use depends a lot on what features you want, whether it’s nothing more than a simple, basic integration, or if you want more detailed workflows and additional options. There’s something for everyone, you just have to determine which one. Here are the best options we’ve found, and their pros and cons.

We’ve put this option as option 0 for a reason: it’s no longer accessible… sort of. Mailchimp used to be partnered with Shopify and had an official Shopify app. At some point last year, they discontinued this official app and partnership. You can read more about the reason why here. In short: Shopify updated rules for what apps that collect user data need to do with that data, and Mailchimp chose not to comply. 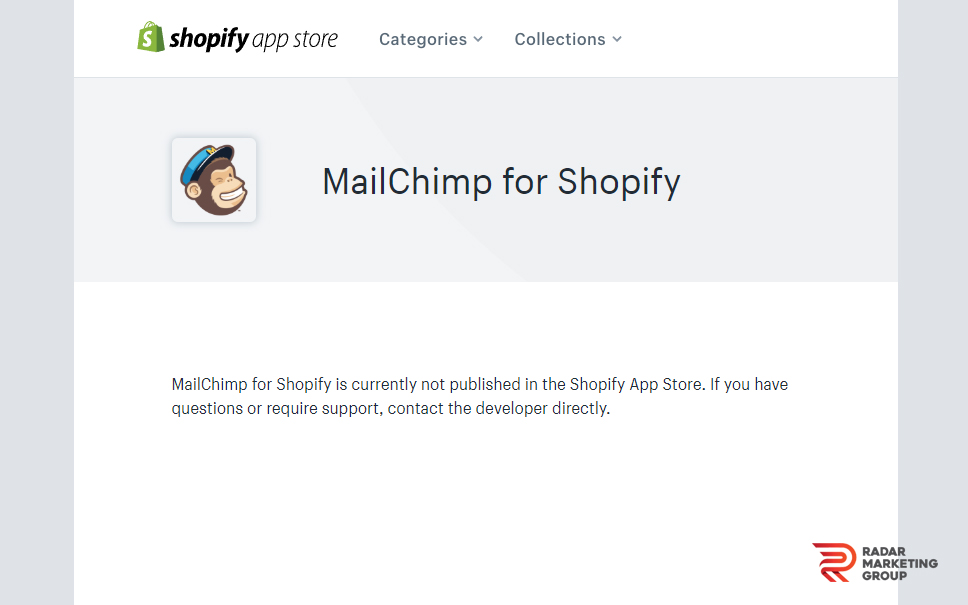 The official Mailchimp for Shopify app is no longer available for download. However, if you have downloaded and installed it in the past, it will still work. This is a good thing for those of you who have installed it before but didn’t quite get around to setting it up, or for those of you who use it but are looking for something better. As long as you don’t remove it, you’ll be fine to keep using it.

That said, if you want something with more features, modern compliance with Shopify’s private information policies, or just recent updates, you’ll want to look into other options.

Note that if you want to move from this app to another provider, you will want to install the other provider and make sure your data is synced before removing this app, to ensure no data loss.

This option is great if you want to stick with the official code from Mailchimp, and you don’t need a bunch of additional features or automation. Mailchimp offers some basic opt-in code that you can generate, then copy and paste it into your website. It’s free, which is a big benefit over some of the other options on this list. Unfortunately, it only offers a few limited features.

At the most basic level, the Mailchimp widget offers your usual mailing list management, email sending options, and the basic features Mailchimp offers to its customers. You also get pop-up opt-in forms, as well as the ability to send remarketing/retargeting emails, and the ability to link your list to Google Ads for remarketing ads.

Unfortunately, that’s pretty much it. This code is the simplest and easiest way to get basic Mailchimp and Shopify integration, and its list of features reflects that. It’s free, it’s easy, and it’s lightweight, which can be ideal for some people who don’t want a lot of extra features and nonsense, but falls flat if you need extra integrations. 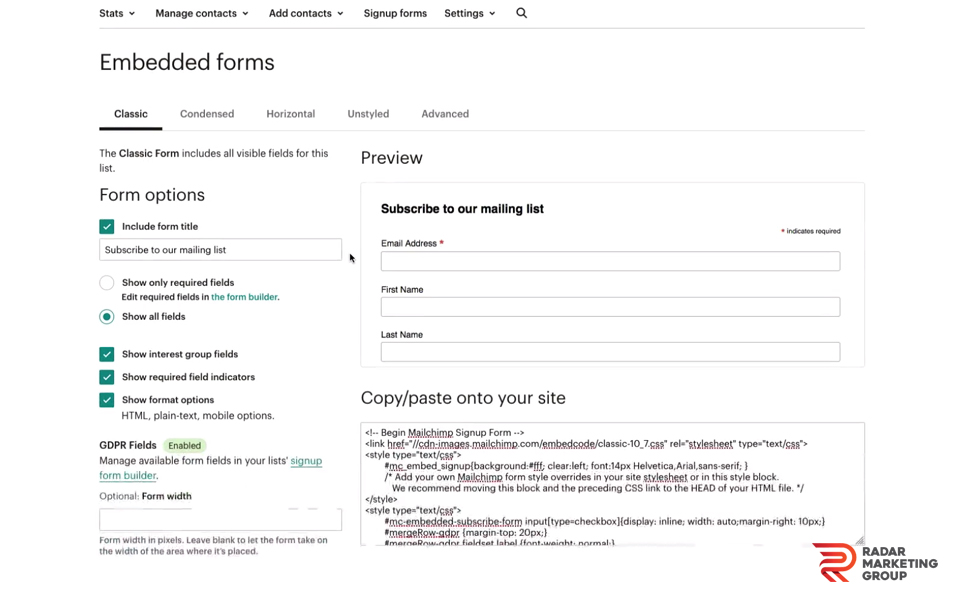 This method does involve manually editing code on your website, so if you’re not comfortable doing that, you may want to hire a developer to handle it for you. If you want to do it yourself, here’s how:

You can read those steps, as well as what you can do once you have the code installed, on this page.

ShopSync.io is one of four third-party integration options we’re going to discuss today. It’s one of the options most highly recommended by both Mailchimp and Shopify, and as such, is probably the option most people will go with.

It’s also probably one of the most robust options you have for syncing up data between Shopify and Mailchimp. According to Mailchimp, it has a variety of additional features you can’t get through other platforms, including e-commerce tracking and reporting, content blocks for emails including product recommendations, product content, and promos, tag merging, remarketing ad integrations, and more. All of this, again, is free. 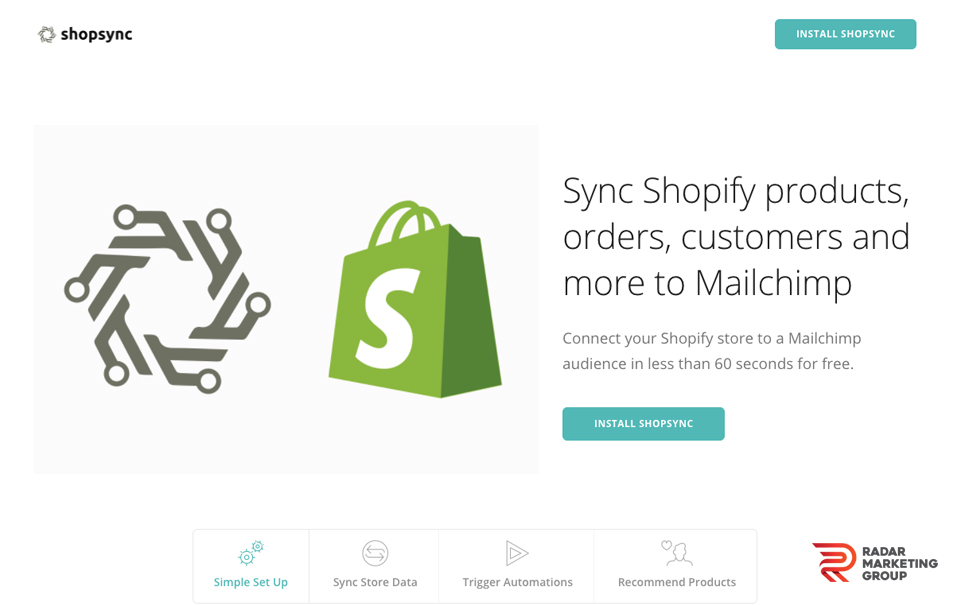 You can click on the link above to go to ShopSync’s website, which has a link to their Shopify app as their main call to action button. Alternatively, you can skip a click and just click here to reach it directly.

Once you’re logged in, configure your options. You can choose a list you want to sync, choose opt-in settings, and map tags to merge if you want to merge tags. Once your options are chosen, simply click to start the sync. The sync will run for a varying amount of time depending on how much data it has to process, but it’s generally quite quick.

That’s it! You can choose to upgrade ShopSync to a paid plan, but it doesn’t get you any additional features. The paid plan is $5 per month and it gives you access to their email and live chat support, in addition to the publicly available knowledgebase you get for free.

These engines are essentially middlemen that process data from one API to another, when those two APIs don’t have an official integration. It’s a way to connect disparate services into automatic processes when they don’t provide the ability to do it themselves.

Zapier is one such engine. They have thousands of different integrations set up, and the ability to configure your own if you want. It’s incredibly powerful and advanced, and despite the fact that your average internet user doesn’t know about it, it’s one of the marvels of our modern internet. 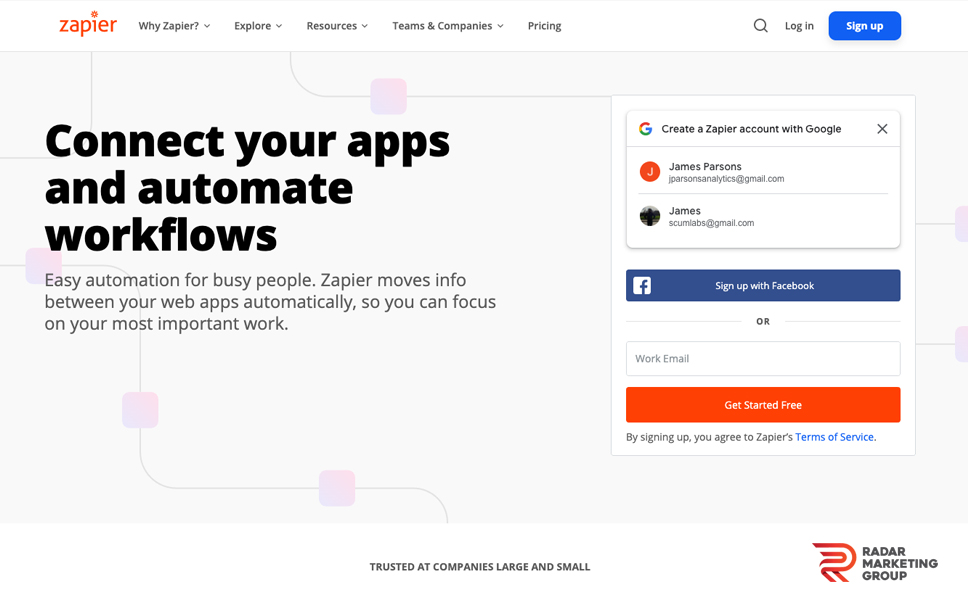 You don’t need to make your own for Mailchimp and Shopify, though; that zap already exists. More specifically, ten different pre-configured zaps exist, along with the ability to make your own by choosing a trigger and an action pair.

Triggers and actions can both be on either the Mailchimp or the Zapier side, and they represent a single action you would otherwise have to do manually. For example, you can choose the trigger of “a user makes a new order on Shopify” and the action “add subscriber to Mailchimp tag”. There are dozens of triggers and actions, for thousands of combinations, to suit many different needs. 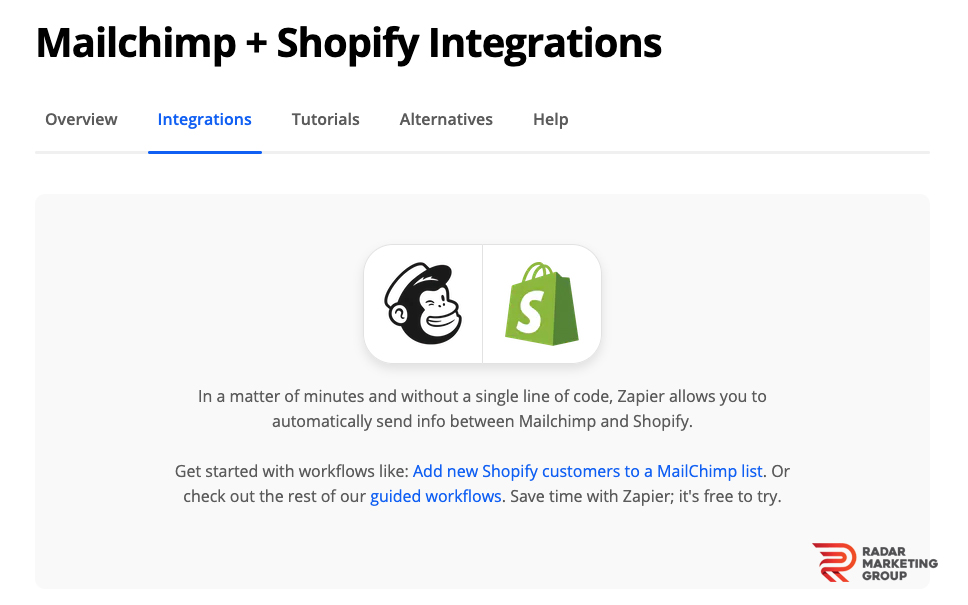 Zapier, unlike the previous options, is not free. They have a free version, but it’s limited to 100 tasks per month, and you can only have up to 5 zaps at a time. If you want more zaps, or you need more than 100 tasks per month (which you probably do), you’ll need to pay for a plan. Plans start at $20 per month for 750 tasks per month and 20 zaps, and also give you the ability to set multi-step zaps. Pricing, as you might expect, scales up from there.

Why would you use Zapier when ShopSync exists? That’s a good question! ShopSync has a lot of features to it, but it’s an all-or-nothing package. You install the whole app even if you only want to use a small fraction of it. Zapier allows you to create specific zaps for specific processes you want, and does exactly those processes; no more, no less. It’s extremely customizable – and can link to thousands of other apps you might be using throughout your business – so it’s very flexible. For some people, who want an extreme level of automation, it’s great. For others, it’s too much setup for too little payoff.

If you’re a power user and run a large eCommerce site, you’ll love Zapier. If not, read on.

The other automation engine we’re mentioning today is one we already mentioned; Automate.io. They’re similar in concept to Zapier, with triggers and actions that combine into specific workflows. They have over 100 apps in their roster, with a wide range of triggers and actions for each. Rather than calling the resulting recipes “zaps”, they call them bots.

Again like Zapier, Automate.io has a free plan with a limited number of bots and a limit on the number of monthly actions those bots can take. Specifically, the free plan is up to five bots, with up to 500 total actions per month across those bots. 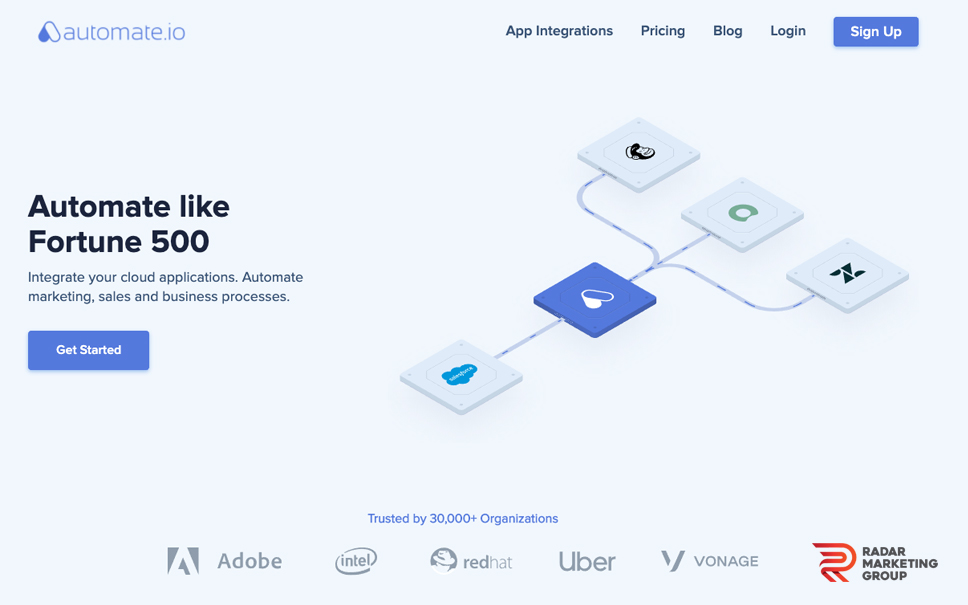 Paid plans begin at $50 per month, much higher than Zapier, but the paid plans start at 10,000 actions per month and up to 50 bots. Again like Zapier, Automate allows multi-step bots with their paid plans.

Unfortunately, Shopify is a Premium App on the Automate.io list of integrations, which means you’ll need the paid plan to access it as part of your bots.

There’s really very little difference between Zapier and Automate.io. Both require at least a bare minimum of paid plan to use Shopify and Mailchimp integration. Both require manual setup of the triggers and actions you want to use. Both have a robust range of triggers and actions, and the list is near-identical. After all, there are only so many things you can do with either platform, right?

The only real difference is the budget. Zapier is better if you have a limited budget and don’t need a lot of traffic or actions per month. If you’re bumping up to a mid-tier plan on Zapier, Automate is roughly comparable.

If these DIY options are all too much for you, but ShopSync doesn’t appeal to you, you can use another third-party Shopify app that connects Mailchimp similar to how the official Mailchimp app worked before they discontinued it. Seguno offers one called Mail Connect. 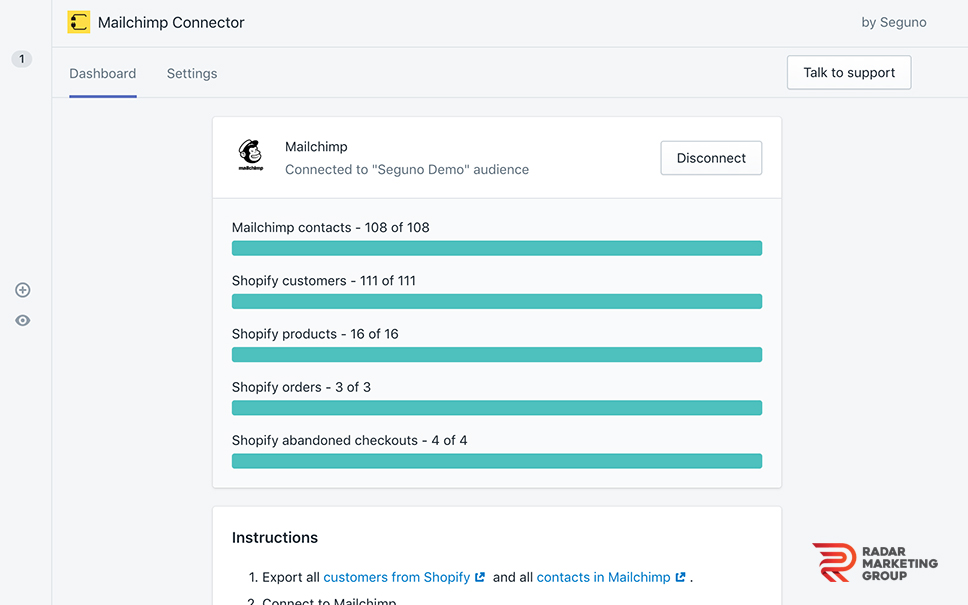 There’s not a lot to say about this app; it does what the old Mailchimp app did. It creates a Mailchimp connected site, it syncs data in both directions, and it adds the Mailchimp script to your site. It’s $10 per month.

That’s pretty much it! It’s simple and lightweight compared to ShopSync, but faster and easier to use than the manual method or the automation engines. It’s a good middle of the road option, or a good replacement for the discontinued app if you want the same feature set but with updates.

Which Option is Right for You?

The key to remember about linking Shopify and Mailchimp is that email communication is hugely important, and that these integrations and email automation methods require an advanced toolset and practiced hands. If you misconfigure a system, all manner of things can go wrong. You can accidentally spam your customers, or remove them from lists they should be on. You can end up with incorrect or duplicate subscriber counts, you can see data loss, and you can lose out on product recommendations. There are countless examples of novice companies accidentally exposing their entire customer list.

Because of this, you need to be careful and sure of what you’re doing. If you’re not sure at all and you want a simple option, the Shopify app by Seguno is going to be the best choice. If you’re looking for a more robust system with as minimal a chance to break things as possible, go with ShopSync. If you want to DIY your own system, or set up integrations between Shopify, Mailchimp, and other apps like Salesforce or HubSpot, use the automation engines.

Using the manual code can allow you to customize it further, but we strongly recommend hiring a developer to handle it if you’re not entirely comfortable with doing it yourself. Frankly, the same goes for all of these options; if you’re not certain of what you’re doing, hire someone who knows how to implement this for you properly.

William Smith
Founder and President at Radar Marketing Group
William Smith is the founder and president of Radar Marketing Group, an e-commerce and digital marketing agency. Bill is responsible for overseeing development and implementation of global digital strategies for B2B and eCommerce clients. Radar’s clients have included companies such as Comcast/NBC Universal, Eastern Mountain Sports, IBM, Penton Media, and many more. He lives in New Hampshire with his wife and daughter, and their two dogs.